At the start of 2014 I moved from Dunedin to Wellington and stayed with my sis and her famdamily for like.. a month before I found a place.

They were so kind to house me and fed me that I decided to make them a blanket. Of course it had to go with their styles and what their house looked like to start with!

I used my 101 Granny Squares book and used 2 different squares out of it. 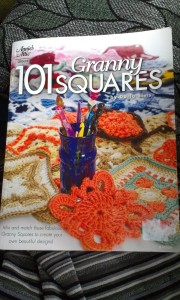 The yarn I started off using I found in my mums stash and started making it around christmas 2013 because.. that’s what I do at my parentals place – knit and crochet!

I was actually supposed to make this really cool scarf pattern that when you rolled it up looked like a smiley face – hence the yellow and brown. However it had been attacked by moths so I shoved it in the freezer for a day to kill off anything still living inside and then went through and salvaged what I could which ended up in lots of tiny little balls of yarn.

AND the colours are perfect for 70s.

So I found some orange as well and set out to make lots of squares.

I ran out of yarn pretty fast though so I had to go find some that would be about the same shades. I went to Spotlight and managed to find wool in the orange and yellow (and added in an awesome green!), but could only find the brown in acrylic.

Brown was of course my neutral colour so had to use it to do all the sewing up which I did by doing 3 chains then a single crochet through the border of a square then another 3 chains.

Unfortunately I didn’t really think about the corners of the squares so they ended up all different which you do notice when you look close enough (my bad!)

I did do 2 different squares – the second type of square I only made single digits of though because I needed to fill in the corners when I ran out of coloured yarn and was putting it all together, looks ok though!! 😀 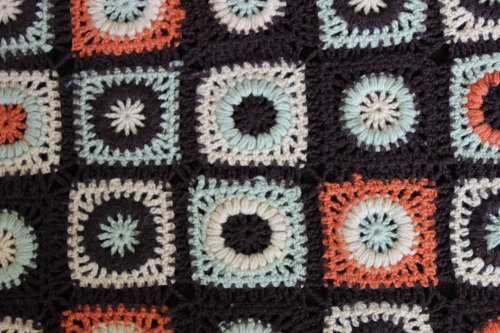 Making all the squares took me.. a lot of time.. this thing isn’t even that big, imagine doing an entire bedspread.. ugh

Making the squares wasn’t the hard part though.. it was sewing it all up. That thing got SO heavy.. and then it was determining where all the pieces went and then when it was all together I had to do the border.

Wow it was heavy by the time I got to the border.. Glad I did do the scalloped border though, it’s so pretty!! I actually asked Kat how she wanted the border done and she said scalloped (I think from memory she did anyways..). So, good choice! Glad it’s over though but it was a fun project.

Mid 2013 I decided I wouldn’t let my yarn collection get out of hand like my fabric had gotten, so I decided that I was only allowed to have 1 box of wool. Unfortunately I then wanted to make a few soft toy type things which required different yarn from what I had. What to make to dispose of current yarn? GRANNY SQUARES !

This was a good reason to use my new 101 Granny Squares book as well.

The blanket turned out really well, used up heaps of yarn out of my box and gave me a new appreciation for sewing together lots of granny squares – tedious and heavy, REALLY HEAVY. I gave this to my sister in law for her new baby boy William since its a perfect cot size. 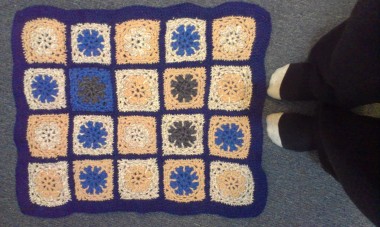 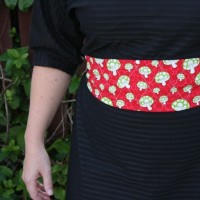 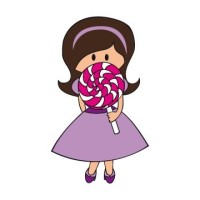 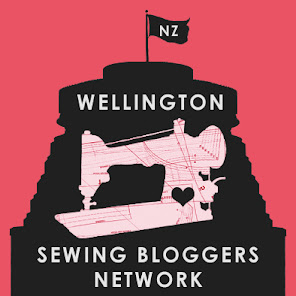